Bonnie will get out his guitar and play a scary song. It can stun opponents or give them damage. press B to put it away

Side B - Ghost Carrot

Bonnie will get out a carrot. He can throw it to poison opponents. or eat it to restore 10% health

Up B - Robot Rabbit Hop

Bonnie will hop up high like the Bunny he is. if someone is under him and being a heavy robot he can bury opponents to the ground

Up: *Looks at the screen*

Dn: *Takes out his carrot, Mumbles something and laughs about it*

Victory 1: *Puts the Opponent in a Suit*

Victroy 3: *Stares at The Opponent*

In Five Nights at Freddy's

Bonnie is a lavender rabbit animatronic, with maroon eyes. He has articulated ears that can bend forward and wears a red bow tie. Onstage, he carries an orange guitar. Excluding his head, the majority of Bonnie's body appears identical to Freddy's, apart from the latter's color. This version of Bonnie, like most of the animatronics in the first game, seems to have no teeth on his upper jaw.

In Five Nights at Freddy's 2

In the second game, Bonnie has a very different design - like Freddy Fazbear, he also has two buttons on his chest. His face has been gutted, with most of it being removed, while his lower jaw remains, featuring more teeth than he possesses in the first game as well as glowing red irises. His left arm is missing entirely, with a mass of wires in its place. His suit has become more tattered, particularly around the legs, and a few loose wires poke out of his body. The covering on his right hand and left foot have come off, revealing his endoskeleton. He also seems to have a bigger stomach, as it looks more rounded and bigger than his upper body. His chin also doesn't squash his bow tie now. It is explained in game that this new appearance is due to an attempted retrofit of the old animatronics that took place, before they got junked in favour of the Toy Models, such as Toy Bonnie. 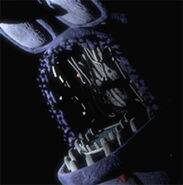 Colonel: What is it, Snake

Snake: Colonel, there's a Robot Purp---- *Gets killed by Bonnie*

Jameson: Parker, i hope i Survive this Monster

Jameson: This Robot is name Bonnie, a Purple Robot Rabbit

[A Photo of a Purple Rabbit]

Jameson: PARKER!!!!!!, He doesn't look like a Purple Robot

[A Photo of a Purple Robot]

Jameson: Thats it, sick him Bonnie

Parker: Wait, what *Gets Killed by Bonnie*

Sailor Scout Bonnie
Add a photo to this gallery
Retrieved from "https://smashbroslawlorigins.fandom.com/wiki/Bonnie?oldid=133545"
Community content is available under CC-BY-SA unless otherwise noted.