Amy snatches the opponent's item away. There are 2 things it could be:

While the effects remain the same, it disables the opponent's neutral special for at least 5 seconds. Unless the item used in the neutral special is a one-and-done item, taunt to be rid of the item.

Side B - Hammer Spin

Amy spins around with her hammer out. You can move her in either direction as she spins. It lasts shorter than Mario Head's spin technique, but it has a longer reach. You can't jump while you spin.

Up B - Hammer Dive

Amy leaps up into the air with her hammer, then slams it down on the opponent's head. The impact of the landing sends shockwaves around opponents that are next to her on the ground which deal less damage than the hammer itself. She'll instantly latch onto a solid edge when she uses this to get to an edge.

Down B - Magical Hammer

Amy flattens the opponent with her hammer. In the flattened state, the player is left to more damage than usual, his/her jump height is chopped in half, and he/she is unable to attack, all lasting for 6 seconds. After hitting an opponent, Amy has to wait 8 seconds before she can do this again.

Amy unleashes the power of the Chaos Emeralds and Super Emeralds (maybe even the Master Emerald) and goes hyper. Like Wario's final smash, this is a short phase (12 seconds) that manages to greatly improve her attacks and defense. Her special attacks are even able to do more: 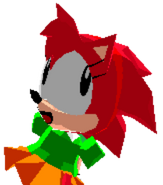 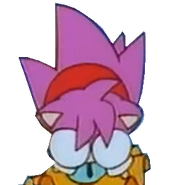 Amy Rose is a video game character who appears in most of the Sonic the Hedgehog series developed by Sega's Sonic Team. She made her debut appearance in Sonic CD (1993). Amy Rose was created by Kazuyuki Hoshino and based on one of Kenji Terada's characters. She was redesigned by Yuji Uekawa for Sonic Adventure. She is a happy-go-lucky pink, female, anthropomorphic hedgehog who is obsessed with the series' title character and protagonist, Sonic, even going so far as to declare herself his girlfriend. She has chased Sonic since her debut in 1993, and has been trying to win his heart in everything from the series' games to animated TV shows and comics. She is also one of the series' most popular characters, coming in fifth place in an official popularity poll.

Like Sonic and other characters in the series, Amy is significantly shorter and lighter than humans her same age. She is 12 years old and 90 cm (2 ft 11in) tall. She was originally described as being 8 years old in Sonic CD, but as of Sonic Adventure and onwards, she has grown older. Also, with the addition of Cream the Rabbit, Amy seems to have found herself a sidekick similar to Sonic's sidekick, Tails.

Rosy the Rascal
Add a photo to this gallery

Retrieved from "https://smashbroslawlorigins.fandom.com/wiki/Classic_Amy_Rose?oldid=107054"
Community content is available under CC-BY-SA unless otherwise noted.