Cpend7 pops out the portal and lands on the battlefield.

Side B - Awful Movie Throw

This time Cpend throws the horrible movie that he hates/dislikes.

At No (0%) Damage he throws: Exorcist II: The Heretic, Howard the Duck, Superman IV and The Garbage Pail Kids movie.

and finally at 100% Damage he throws: Superbabies: Baby Geniuses 2, Alone in the Dark, Birdemic: Shock and Terror and The Last Airbender.

Note: you can throw 3 Times when it's empty you have to wait in 8 Secs that can refilled.

Cpend use the S.I.a.B. (aka: Space Invaity and Beyond. Hybid of Space Invaders) that will gave Cpend to go Higher. You can go left and right and you can shoot a laser downwards but only 3 to 4 lasers.

Cpend will throw his Cards to Summon a character from Other Media Feating a Speical Card.

Link 64 use his sword to slash at the opponent, Ocarina to use a Special Ability to give it to Cpend (Heal, Speed and Jumps) and his Shield to Defend at any Damage.

ALL GLORY TO THE HYPNOTOAD! (The Hypnotoad can make opponents standing still for about 10 seconds, but Cpend is not, because he's unaffected)

Disney Genie can give opponents his 3 Wishes. The wishes can be at Random (Lightning, change the opponent's attacks and explode by Fireworks)

Dr. Salvador will Walk at the Opponents to give them a painful Damage with a chainsaw (Not Cut the Head off for a Instant Kill)

Cpend sent out his Philips CD-i called (C: Colin's, D: Death - i: intergaming) and Change the Stage to Link: The Faces of Evil/Zelda: Wand of Gamelon and Hotel Mario that can Change the Control to the CD-i Version to make it possible. There are 15 Spawn of Enemies around in the Game like (Hotel Mario: Goomba, Koopa and Wiggler. Link: TFoE/Zelda: WoG: Moblin, Goriya, Ghini and Armos) the same But Cpend can Pick Only one Game to play this. The Final Smash will be done after in 35 Secs.

Cpend summons the Castle from Castle Calamity series the Castle was invisible and you can use the Special Attack to make it hard.

Neutal B - TOO BAD SUMMON TIME!

Cpend and the Castle can hold up to 8 Summons.

Side B - Explosive Slip Trap

Up B - Rocket Blast

This time around, Cpend's moveset is more music based, focused more specifically on his signature headphones rather than his taste in video games and movie (which are shown in his taunts). His standard attacks consist of simple melee attacks while his smash attacks have him use his headphone chord as a whip.

Neutral B - Volume Up

Cpend turns up the volume on his iPod, making his special attacks more powerful. However, the more he does this, the easier his shield breaks and the easier he can be combo'ed. Not to mention he stands still for 2 seconds, giving nearby opponents a free shot. Can be used 2 times per life.

Side B - Speed of Sound

Up B - Chord Hook

Cpend takes out his headphones and places them on a nearby opponent then turns up the volume. If 2 vol ups have been used, it is a 1 hit KO.

Up: *Holds his Cheese, Chicken, Gravy and Ham Pizza and Smells* "Mmm, Pizza.."

Victory 3: Talk Random at his Opponents

Victory 4 (Againist his Clone): Nice Try Clone go back to the Time Machine!

Victory 5 (w/ her Girlfriend only in Lawl with Garterbelt 4): Let's go Amy (Amy: Sure thing Cpend) (Both Walk Together)

Victory 6 (after you Beat I.M. Meen): "Sorry Meen you can get your own good"

Lose/Clap: Siting, Look Mad and Throw his N64 Controller but it Bounce at the Wall and Hit him at his Head.

Congratulation Picture
Add a photo to this gallery 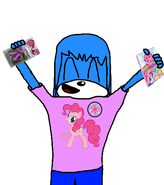 No Colours (Discored Cpend7)
Add a photo to this gallery

Other Pokemon i have

Retrieved from "https://smashbroslawlorigins.fandom.com/wiki/Cpend7?oldid=133954"
Community content is available under CC-BY-SA unless otherwise noted.