Darkwing uses his trademark Gas Gun. Pressing B will cause to shoot a pellet, it does 3% damage and small knockback. But the opponent sleeps for a long period of time before they wake up. If you ran out of three pellets, they will comeback in 15 seconds.

Darkwing uses his Duckmobile. Much like Wario and Mach Rider's Side B. However, the opponents can damage his car with projectiles, eventually explodes in pieces, damaging him and the opponent. Wheels can be pick up after it was destroyed.

Up B - Grappling Hook

Darkwing uses his Grappling Hook and shoots upwards. If it hits the edge, he will grapple to it. But he cannot grapple opponents or items. But good to grapple the Smash Ball.

Down B - Launchpad McQuack

Darkwing summons his sidekick Launchpad to assist him.

Up: "When ever there a evil doer evil doing, I'll be there."

Dn: "I am the hair in the lens of your projecter."

Victory 5 (With Partner): "I'm not getting anywhere with Laughing boy here!"

Average citizen by day and St. Canard's resident superhero by night. He possesses a mix of courageous altruism and a gigantic arrogance and ego, two drives that constantly clash during his adventures - in "Just Us Justice Ducks", he was initially mortified that he'd be getting help against the Fearsome Five. Darkwing's origins are rather fuzzy. On one hand, he frequently claims to be a superhero on the day he became Darkwing Duck after his teenage days. On the other hand, during his childhood and teenage days, Drake was a complete dork; by his high school days, however, he'd already developed an obsession with crime-fighting ("Crash Reunion"). He's been an active superhero for an unknown number of years. In his earliest days of crime fighting, he was more focused on the headlines from his career, to the extent that in "Darkly Dawns the Duck Part 2" he laments that he has no life outside his showboating and no friends to turn to. Launchpad McQuack and Gosalyn gave him a life and help keep him grounded. In the dystopian future of "Time and Punishment", losing Gosalyn causes him to become obsessive about crime-fighting and devolve into a supervillain. His two recurring catchphrases are "I am the terror that flaps in the night", followed by an improvised metaphor before he gives his name, and the battlecry of "let's get dangerous". Because of loose continuity in the show, as well as Darkwing's self-aggrandizing habits, there's more than one origin story for why he became Darkwing Duck - including "Paraducks" (inspired by his own time-travelling adult self), "Crash Reunion" (a random disguise so he could defend his high school prom from Megavolt, and the true origin at least continuity wise), "The Secret Origins of Darkwing Duck" (a Superman parody, which is obviously not meant to be taken as his true origin, it's revealed at the end of the episode that it's just a future Drake spouting out nonsense to make his origin seem cooler due to his ego), and "A Star is Scorned" (which is a "what if" episode and not in continuity). 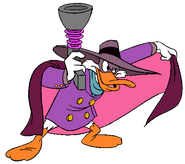 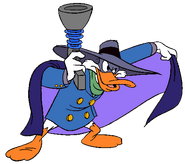 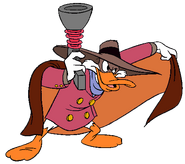 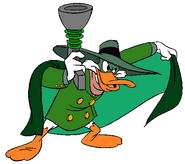 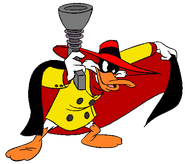 NegaDuck Outfit
Add a photo to this gallery

Retrieved from "https://smashbroslawlorigins.fandom.com/wiki/Darkwing_Duck?oldid=120413"
Community content is available under CC-BY-SA unless otherwise noted.