Ellis has a money system next to her player display window. You'll gains Gems by damaging the competition or Neutral B to used of Special Attack. In a start of the match, you start with 25 Gems. The maximum gems is 50.

Ellis throw a slim, almost-invisible gems to attack. The direction you’ll choose can, and also added 5 more gems to fire. The gems themselves can be saved for a short time later by rolling, dodging, or by jumping

Side B - Black Hole Change

Ellis shoots a controllable large purple projectile that "detonates" into a black hole upon releasing fire. The Black Hole has a delay before it can be detonated, can only be moved up and down, and continuously moves forward. The projectile moves slowly and sucks opponents towards it in a small radius. The black hole that results lasts a few seconds, sucks in opponents so they go midair in a large area damaging them for minor damage and blocks projectiles. The cost of it is 4-8 gems

Up B - Meteor's Launch

Ellis created a small, flaming ball that lift her into the ground or recovering it mid-air. Afterward, You can press B again to throw it in an downward arc into the opponents. When making contact with an opponent, it'll manage created a combust flames. Bystanders don't take as much damage from the combustive flames, regardless of how much damage the victim takes.

Down B - Moonlight’s Shine

Ellis created a special magic to increase or decease her stats or characterize. When this is done, you get one of a many spell change by what the Gravity Sword’s color glow:

Each spell will lasts you for about 15 seconds, and you can only be use three per stock. 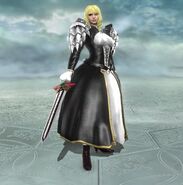 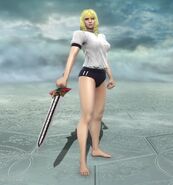 Ellis Lostness in SCV(Alternative)
Add a photo to this gallery

Retrieved from "https://smashbroslawlorigins.fandom.com/wiki/Ellis_Lostness?oldid=108906"
Community content is available under CC-BY-SA unless otherwise noted.