Fiona fires a yellow-red orb shaped projectile that travels in a straight line until it hits the opponents or destructible portion of a stage, at which point it explodes into flames. If it does not hit either of the aforementioned objects within a few feet or hits a wall, then it dissipates.

Side B - Butt Bomber

Fiona lunges her behind towards her opponents and blasts them. The move is capable of launching the opponent a good distance away if it connects successfully and if done it mid-air, giving you a good recover. The trade-off, if by making a capable into a wall, Fiona will rub her button in pain after landing and cause yourself damage.

Up B - Father’s Sword

Down B - Isabella’s Dance

Fiona perfrom a bellydance’s move. Like mostly every horniness-bard moves, when close a opponents they are stun for 6 or 10 second by what a horniness stats the opponents did. Females and some other creature get nullifed when using this move.

Fiona (When she is summoned as a Assist Trophy), focus her magic power and create a huge power of fire that deal huge damage to any that get near it. This has a similar affort to Entei’s from Brawl. However, she has one more advantage: that if a male opponent is very close to her when she is focusing, he can't resist staring at her huge tits. This will leave him open to get hit by the fire pillar.

Role In The Subspace Emmisary 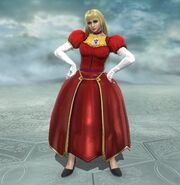 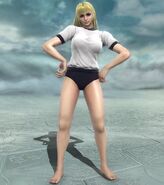 Add a photo to this gallery

Retrieved from "https://smashbroslawlorigins.fandom.com/wiki/Fiona_Blazela?oldid=106474"
Community content is available under CC-BY-SA unless otherwise noted.