Fluttershy does just that to the battlefield.

FlutterShy flies in toward her spot in the battlefield and says the catch phrase of Fat Albert.

Fluttershy takes on the form of her bat counterpart. In this form, she has double the strength and speed. Press B near an opponent and she'll bite him/her, slowly dealing 5% damage per second. The only way to escape her is by rapidly tapping A. Fluttershy remains part bat for 30 seconds. Once it's done, the cooldown time is another half-minute.

Fluttershy gives the opponent a serious stare. This is basically similar to Derek's Magnum, but with a few differences, aside from it not having a fashion buildup. The damage dealt and length of time her cold stare stuns the opponent is always the same. The shield it emits is invisible and its range varies on how dark an opponent is (similar to how Sora's final smash works, but less of an insta-killer). The lowest should be in her face in order for the effects to kick in. The highest can be stunned from one side of the screen to the other. This won't stop projectiles, though. Fluttershy can move as she stares, but only at 25% of her speed and no jumping. You can press B again to cancel it, but every time you use it, 10 seconds are added to the cooldown time of her neutral special.

Up B - Hurricane Fluttershy

Fluttershy creates a mini tornado that appears in her place. For 3 seconds, opponents will get sucked into it. Obviously those that are caught inside will take damage from it. Once it's done, Fluttershy emerges from the eye of the tornado.

Fluttershy hides away in a bush that appears behind her. While inside, she's unable to take any hits from anything, even final smashes. In the bush, she can inch away either side, but cannot jump. You can exit by moving down and pressing B again. This can only be used once per stock, and she stays in the bush for 5 minutes tops.

A bunch of woodland creatures split up and go off in both directions, dealing damage to those that they run into. She then shouts that the competition is going to love her, which does an instant KO if you're close enough.

A vase spontaneously appears behind Fluttershy and is able to be kicked when she is facing the opposite direction of the vase by pressing B. The first kick makes it wobble, bumping people away similar to Wobbuffet in SSBB. If it's leaned back, then pressing B near the vase knocks it over, turning it into a spike trap similar to CD-i Link's jug of life water. Pressing B anywhere else makes the vase/vase bits vanish and reappear behind her.

Side B - The Stare

Fluttershy does her signature menacing glare. Her stare of death can stun anyone she meets face-to-face (making it more realistic). Anyone that tries to attack her will instead just have a second thought about that action. This can also, for some reason, cause projectiles to be deflected and will also destroy human-related traps on the inside. Rather than how dark someone is on the inside for range like in Lawl X, The Stare's stun time relies on how much someone is able to withstand it (see the list to know more). She also can't bizarrely move around (which looked more like slight hovering...on the ground...with her hooves).

Up B - Butterfly Effect

Down B - Hush Now, Quiet Now

Fluttershy sings her lullaby. It's similar to Jigglypuff's singing, except that this can be charged up for a longer distance and an extension of the lyrics. This doesn't work on those that are already sleeping since it would likely cause sleep inception, and if Sweetie Belle is an asst. trophy who will be summoned when Fluttershy sings, it doesn't change her AI.

Fluttershy.mov's stage appears right in front of her as she is nowhere to be seen. It will stay for 20 seconds before disappearing. This will make 3 random opponents walk into her shed. After doing some bizarre role-play of Shed.mov, Fluttershy appears at the door saying Fat Albert's catchphrase (except it won't be in the voice of what sounds like Bill Cosby impersonating Patrick Star and vice versa) and asks "What did I tell y'all about comin' into my shed!?" Anyone with the most damage (if it's a tie, the victim is chosen at random) will be sung to by Fluttershy. No matter whose brain is getting eaten, she always heals 74% damage near the end of the final smash.

Up: "We are just doing it for the ticket."

Failure/Clap: Lies down in sorrow

Snake: Mei Ling, what's with the other pony?

Mei Ling: That's Fluttershy. The poor little girl's had such a hard life. Don't you think so?

Snake: Yeah, but I think that came from a creepypasta.

Mei Ling: Well, be careful Snake. She has a chainsaw that can cut you in half, allowing her to harvest your brains.

Mei Ling: Yeah, but go easy on her. Pleeeeeeeeeeeeease?

FlutterShy is a pegasus pony with a light yellow body and a pink mane and tail. She is sweet and calm, but often very shy around others. However, she can become forceful and assertive if her friends are placed in danger. Fluttershy loves and cares for all animals and is willing to help them at any cost, but is very fearful of dragons. Although she is a pegasus, she prefers to stay close to the ground,(because she has a slight fear of flying) living in a cottage near the forest instead of the sky city of Cloudsdale with the other pegasus ponies. She has a pet rabbit named Angel, who is very picky about what he eats and sometimes becomes irritated at her timidity and embarrassement. She possesses a special ability known as "The Stare", which allows her to intimidate the fiercest animals to the point of complete and total obedience and/or compliance. She first displayed this ability in the season one episode "The Stare Master" when she subdued a creature that could turn victims to stone by looking into their eyes, disregarding her own body turning to stone and the creature obediently reversed the spell on her, her chicken and Twilight Sparkle. Her assertiveness was explored further in "Putting your Hoof Down" when a boasting minotaur taught her how to aggressively stand her ground (which was soon realized how bad of a pony that made her and she drew it back). Fluttershy represents the Element of Kindness. 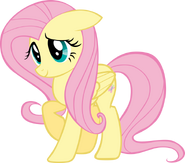 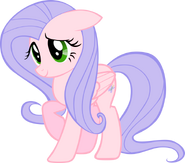 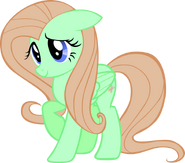 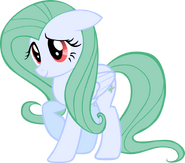 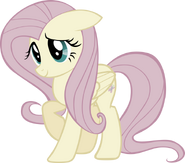 Discorded Color
Add a photo to this gallery 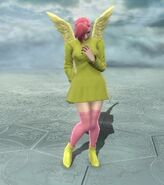 FlutterShy in SCV
Add a photo to this gallery

Retrieved from "https://smashbroslawlorigins.fandom.com/wiki/Fluttershy?oldid=136543"
Community content is available under CC-BY-SA unless otherwise noted.