Gary shoots a flaming arrow from his bow (5% damage on the opponent), if you hold B still for 5 seconds, the bow breaks and it deals Gary 5% damage. Gary can fire 6 arrows per stock so don't waste them!

Side B- Vaccum Power Steal

Up B- Escalator Accelerator

Down B- The Angry Fan

An angry fan appears out of nowhere around Gary to yell at the opponents (5% damage), there's a 1/2 change that the fan will yell at Gary and dealing Gary 10% damage, press Down B to cancel the anytime.

Option 1: "Excuse me one second I'm in a middle in a meeting I'm happy to talk to you when I'm done!"

Gary Bruce Bettman (born June 2, 1952) is the commissioner of the National Hockey League (NHL), a post he has held since February 1, 1993. Previously, Bettman was a senior vice-president and general counsel to the National Basketball Association (NBA). Bettman is a graduate of Cornell University and New York University School of Law. Under Bettman, the NHL has seen rapid growth of league revenues, from $400 million when he was hired to over $3.0 billion in 2010–11. He also oversaw the expansion of the NHL's footprint across the United States, with six new teams added during his tenure, bringing the NHL to 30.

However, Bettman's tenure in the NHL has been controversial. He has often been criticized for attempting to "Americanize" the game, and expanding the league into non-traditional hockey markets such as the American South at the expense of the more traditional markets in Canada and the Northern United States. Bettman was also a central figure of three labor stoppages, including the 2004–05 NHL lockout that saw the entire season canceled. These controversies have made him unpopular with many fans around the league.

More information can be found on his article on Wikipedia

Gary appears on stage and says "Godd Afternoon everyone!"

I'm Gonna Lock You Out

I'm Gonna Lock you Out 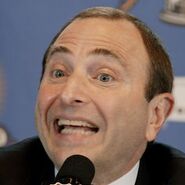 Gary Bettman's Rape Face
Add a photo to this gallery

TBA
Retrieved from "https://smashbroslawlorigins.fandom.com/wiki/Gary_Bettman?oldid=130475"
Community content is available under CC-BY-SA unless otherwise noted.