Jiggly come out of a Pokeball.

Jiggly will use Disarming Voice on a Opponent, Not only giving damage, but Also removing either the opponent weapon or a Weapon-Base attack for a few. (Ex: Sandvich33 Wii Remote)

Side B - Dash Attack

Jiggly will dash and Ram into a Opponent, Giving Major Damage depend what distance She is.

Up B - Sing Attack

Almost Similer to her Brawl Counterpart, Not only Jiggly will sing a opponent to sleep, It will also give some Damage.

Down B - Earthquake Wave

It might sound Crazy, but Jiggly will use Earthquake to give a Opponent Major Damage depending on how close She is.

Jiggly will send out Electric Spark between Her, Giving the Opponent MAJOR Damage to who ever next to her or about to land on her.

Victory 4(Against Uni-Kitty): "I'm sorry, You wanna get Ice-Cream?" 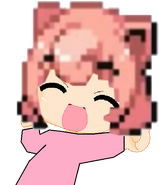 Moemon (short for "Moekko Monsters") is a hack of Pokémon FireRed that changes all Pokémon into gijinka. It is a simple change of FireRed, but with additions such as the ability to catch the three starters, Eevee, and a mix of both LeafGreen and FireRed Pokémon (thus making it simpler to obtain all Pokémon). The game still receives a fair amount of attention, as a patch was released solely for the FireRed hack that updated both the sprites of the Pokémon as well as their menu sprites, functioning like DLC would for any game. Jiggly is one of, Being a Gijinka Version of a Jigglypuff.

Yellow Jiggly
Add a photo to this gallery

Retrieved from "https://smashbroslawlorigins.fandom.com/wiki/Jiggly?oldid=128531"
Community content is available under CC-BY-SA unless otherwise noted.