Kitana will get her fans out and toss them at the opponent, giving them damage.

She can throw up to 3 fans, giving extra damage.

Each time you throw a fan, it takes a few to recharge depending on how many you threw

B & Side- Pixie Dust Teleport

Kitana will teleport behind an opponent.

If an opponent hits the dust before or after her teleporting, the opponent will take some damage.

If an opponent is near the edge of the platform, Kitana will instead teleport infront of the opponent.

B & Up- Square Wave Punch

Kitana will fly in the air and punch at an opponent. Whoever gets hit receives damage.

She can move left or right while she's flying upward. (Similar to Pikachu's up+B)

Kitana will spin her fans to send a wave to an opponent, stunning them for a few.

She can stun up to 3 opponents.

Kitana will grab on to an opponent and kiss them, inflating them. The inflated opponent will later fly in the air, causing an instant star K.O.

If an opponent gets stuck under a solid platform, Kitana (or another character) has a better chance of attacking the opponent, causing them to explode.

Note: If an opponent is stuck on a solid platform and no one attacks him under 7 seconds, the opponent will go back to normal size.

Princess Kitana is 10,000 years old(and Still Young and Sexy), but is considered young in her realm of Edenia and only appears to be in her early twenties. Throughout the years, she rose to great importance; first as the loyal stepdaughter of Shao Kahn, then as his enemy, tearing herself away from his grasp and freeing her home realm of Edenia. She also led an army into Outworld to combat any chance of Shao Kahn rising to power again.

She shared a subtle love interest with Mortal Kombat champion Liu Kang, even after he was murdered by the Deadly Alliance. Despite having been loyal to Shao Kahn for most of her life, she aligned herself with the side of good upon learning the truth regarding her past and real family. 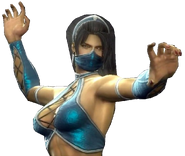 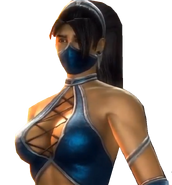 Role In The Subspace Emissary

Retrieved from "https://smashbroslawlorigins.fandom.com/wiki/Kitana?oldid=146628"
Community content is available under CC-BY-SA unless otherwise noted.