When pressing B, Panty pulls out her trademark pantied pistol. Holding B allows her to charge, and releasing B fires. Moving the directional stick in any direction makes her fire in that direction. Holding it back makes her do a backflip while firing, as holding it forward makes her roll forward and shoot. The bullets do more damage with the funky tricks.

Side B - Random Pole Dance

Up B - Cosmos Pole

Panty uses a stripper pole, nicknamed "The Cosmos Pole", to reach greater heights. When Up B is pressed, she immediately begins climbing, and will jump off when A or B is pressed, or when she makes it to the top. She also jumps in the direction she was currently facing.

Panty jumps into the foreground and switches out with Stocking.

Like her sister, Stocking uses her trademark stockings as swords. Holding B makes her charge up both swords, as releasing B makes her spin in a tornado. When spinning, she can deflect projectiles and hover in the air. She stops after a few seconds or when A or B is pressed. She can also move in any direction pointed, with the same properties as above.

Side B - See Through

Stocking takes a ride in the girls' convertible known as See-Through (even though it can be seen). Once B is pressed, she drives forward in direction the analog stick was pointed in, and pressing A or B makes her do a caryuken jump. The car can also drive up walls (but can't caryuken) and run over opponents.

Her swords aren't just for slicing; this up special allows Stocking to use both her Stripes as a mini helicopter. This attack sucks up opponents, dealing rapid damage, and it stops when A or B is pressed or after a few seconds.

Down B - Dessert Deserve

Stocking jumps into the foreground and switches out with Panty.

Before the attack, the sister sitting out joins the other out on the field.

When the attack is initiated, both sisters do what their famous for: blatant fan service. They begin their attack to the tune of "fly away now"; while Panty takes off her panties, and Stocking, her stockings, they transform them into their appropriate weapons. Panty first fires her Backlace, stunning any opponent in the way. Stocking then slashes the stunned opponent. Finally, in typical P&S fashion, the opponent realistically blows up.

If the Backlace doesn't hit an opponent, the FS awkwardly ends.

Up: *tilts her head and smiles*

Dn: *picks her nose and dramatically pulls the goo out*

Up: *spins around while laughing maniacally like a mental patient*

Dn: *falls in love while a heart pops out above Stocking's head*

1. *both sit on the couch and kick Chuck around like a hacky sack*

Otacon: "Yes! They are Angels."

Snake: Angels? Give me a break! Are you kidding me?!"

Otacon: "Nope. They can turn their underwear into mysterious weapons."

Snake: *groans* "This is making my head hurt."

Otacon: "If you get hit by a Heaven charged shot from those weapons, you can kiss your butt goodbye."

Otacon: "And they perform a pole dance before charging their weapons."

Pit: "Hey Palutena, who are those ladies?"

Palutena: "These two ladies are the Anarchy sisters. They are angels, just like you, Pit!"

Palutena: "Whatever or not, these angels, named Panty & Stocking, were banished from heaven due to their behaviour."

Pit: "If they were angels, what happened with them?"

Viridi: "Panty was in search for a man to sleep, while Stocking eats very much sweets. That's too bad for her."

Palutena: "Back to fighting. To avoid their attacks, use your bow or shield."

Panty is often portrayed as a celebrity blonde and is always looking for different men to sleep with. She has low standards in men and is occasionally shown to be unsatisfied after the act. Unlike her sister Stocking, Panty doesn't take her job as a ghost-hunter seriously. Instead, she focuses on fulfilling her personal goal of sleeping with one thousand men during her stay on Earth. Panty is often considered to be the personification of the deadly sin, Lust. Which is emphasized on the number of times she has had sex throughout the series, and by the X-ray of her brain during the opening sequence, which shows her only thoughts are about both: men and sex. Panty is also quite shameless, not caring when some broadcasters were able to see (and record) her panty-less, and even going as far as pole dancing in front of an audience, while on a live show. Panty jogs to maintain her figure, and is annoyed that Stocking doesn't have to do this. She also claims her smaller chest size is more sensitive and responsive than Stocking's bigger breasts. Panty likes spicy food in general, and mentions disliking sugar. Her favorite snack is Death Babanero-flavored potato chips and has shown a great fondness in living a celebrity lifestyle.

Whenever Panty hunts ghosts, she works in a non-precautious way. She often takes the more reckless route, using pure power to finish the job. However, this style of fighting has caused her to be wide open for attacks, including losing her panties in the heat of the moment and forcing her to improvise with either, using normal weapons or other underwear.

Stocking is a level-headed and intelligent girl, though, she can be rude if provoked, especially towards her older sister, Panty. Stocking enjoys eating various desserts and sugary food, but doesn't seem to gain weight (she assures all the fat goes towards her breasts anyway). However, she acts quite enraged and sensitive whenever anyone calls her fat. Stocking is often considered to be the personification of the deadly sin, Gluttony, due to her obsession with sweets. She does not share Panty's obsession with sex, even though she does display some masochistic tendencies, such as bondage, vore and electrocution. Which is ironic, since she constantly insults the demon sisters and Corset, by calling them 'BDSM loving freaks'. Instead, Stocking claims she has very special standards in men, and would rather be with someone she loves, than simply for sex. She strings men along (not wanting them to believe she is 'easy'), and would never cheat on someone she truly loves. However, she has been shown to have a very strange and twisted vision of what attractive is. She hates spicy food, just as much as Panty hates sweet food. Stocking is sometimes overshadowed by Panty when in larger audiences, like in "Sex and the Daten City" and "1 Angry Ghost". She is almost always seen carrying around a plush cat, Honekoneko ("Bone Kitten"), whose expressions often match Stocking's mood. 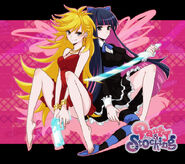 Changes the colors of her dress and shoes.

Has the exact same colors of her original outfift.

Changes the colors of her dress and hair.

Has the exact same colors of her original outfift, minus the blue swap is now her default color.

Retrieved from "https://smashbroslawlorigins.fandom.com/wiki/Panty_%26_Stocking?oldid=142720"
Community content is available under CC-BY-SA unless otherwise noted.