Pyrrha charges up her sword and slashes the opponent. The longer she charges up the sword, the more damage the attack will do.

Side B - Angel's Strike

Pyrrha stabs her opponent with her sword and screams.

Up B - Guardian's Judgement

Pyrrha punches the opponent into the air, slashes her opponent once and kicks it down.

Pyrrha will step forwards and punch the opponent into the air.

Pyrrha will shy away from her opponent once again symbolizing her hesitance and unwillingness to fight. She then stabs her foe three times with her sword. After the final smash she tranforms into Pyrrha Ω.

Pyrrha Ω charges up her sword and slashes the opponent. Similar to Pyrrha's Neutral B, but more stronger and loses the ability to fully hit airbone enemies.

Side B - Deimos Strike, Arch Predation

Pyrrha Ω hits the opponent with her shield, then impales her sword into the opponent, takes a step back and slashes it out of her opponent's body.

Up B - Styx Cannon

Pyrrha Ω punches the opponent into the air, unlik Pyrrha's Up B it does nothing, instead, the player has to make her third jump and attack manually.

Down B - Unveiled Persona

Pyrrha Ω charges up her sword into her flames, similar to Roy's Neutral B in Melee. This move can be charged for up to four seconds, when fully charged Pyrrha Ω unleashes a massive explosion but ended up 50% damage to herself.

Pyrrha Ω stabs her opponent in the guts, lifts them in the air, stabs them deeper and creates an explosion that sends the opponent into the air, landing on the ground. After the final smash she tranforms back into Pyrrha.

Victory 1: Pyrrha has her hands on her head, due to a head-ache, says "My head!", and falls to the ground while saying "It hurts...".

Victory 2: Pyrrha back away and say "I'm Sorry, You broght this on Yourself!!!" *Then Run Away*

Victory 3: "You were brave, I respect you"

Lose Pose (from Queen Blade)
Add a photo to this gallery

Pyrrha is the daughter of Sophitia and Rothion Alexandra, the older sister of Patroklos, the niece of Cassandra Alexandra and Lucius, and the granddaughter of Achelous and Nike. When a mysterious customer gave Rothion a peculiar metallic fragment, the household went out of control, with the children fighting violently over what their father just received, while Sophitia was experiencing an aftermath from her previous wounds she sustained in her first battle against Soul Edge. A while after her younger sister, Cassandra, set off on her quest, Sophitia made her decision to get involved in order to save her children. When she arrived at Nightmare's former stronghold, she had an encounter with a green clad girl, who wanted to 'play' with her children. Upon returning home, Sophitia found them safe, for now. The girl in green met up with her again, saying that she would be back for them when the time is right. Sophitia knew that she had to stop her, especially with both Pyrrha and Patroklos' lives at stake.

Pyrrha seems weak willed, reluctant to fight her opponents. On occasion, she even seems to regret winning (she cries after the battle, saying This... can't be my fault!). The way she fights combined with her quotes make her participation in the battles look very forced, which is unlike any other character in the game. This is due to her having grown up being seen as a bad omen. She taught herself to avoid conflict and apologize even as others turned their back on her. She has a sweet, somewhat fragile and sad personality. Her gentleness is reminiscent of young Sophitia, who later on became tougher because of the turmoil and her involvement with the Swords.

Arrested for the murder of her master Jurgis, Pyrrha sat quietly in the cold stone prison. She assumed the approaching footsteps belonged to her executioner, but instead a girl named Tira appeared before her. With skillful words, Tira wormed her way into Pyrrha's heart; when the young woman handed her a sword and shield, Pyrrha never thought to refuse her poisoned gift. Then Tira pulled out a red metal fragment, and as soon as Pyrrha saw it, she felt something deep within begin to throb in unison with the fragment's pulsating glow.

The two fragments of Soul Edge were resonating as one.

Seventeen years ago, Pyrrha's mother Sophitia had embedded a shard of Soul Edge within her. Now, in the presence of Tira's fragment, the dormant shard awakened. It set loose the dark emotions that Pyrrha had sealed deep within her heart, and began to gnaw away at her sanity.

An inhuman wail shattered the still night, marking the violent birth of the being who would succeed —and perhaps even surpass— the Azure Nightmare. They would come to call her the "Crimson Despair"...

https://www.youtube.com/watch?v=_xAYvd17STI - The Breeze of Dawn

Role In The Subspace Emmisary 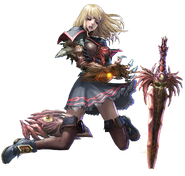 Pyrrha Omega (Final Smash Outfit will Switch to Normal Pyrrha Outfit...so it like Omega Form in Normal Clothing)
Add a photo to this gallery

Retrieved from "https://smashbroslawlorigins.fandom.com/wiki/Pyrrha?oldid=128491"
Community content is available under CC-BY-SA unless otherwise noted.