Rick drops onto the battlefield through a wormhole overhead.

Rick gets the old plank of wood with nails and duct tape out of scenic nowhere and gets ready to do some fucking carpentry on the competition. It's mainly like a battering item, only in some cases, it's far more brutal to the touch if you're on the nail-clad end. At enough strength in Rick's side smash with the 2x4, you can manage to pierce holes into the opponent, causing him/her to bleed. As expected, enough blood in one spot makes a slip trap, blah, blah, blah, the same thing again and again and a...fucking...gain. Only this blood when Rick walks across it manages to strengthen his attacks for a limited time depending on how much blood he's collected from the competition. You can throw the 2x4 around and have others toy around with it, but you can only use one at a time, sadly. You can't get too smashy-happy with the 2x4 either, or it'll break.

Side B - Splatter Smash

Rick slams a fist into the ground and causes bones to jut out the ground in front of him. Doing this to an opponent allows you to perform an aerial combo on them with there being a slight bit of risk in mind. You can charge it up to have the bones jut out further and have there be more bones jutting out from Rick. If you use this while running, Rick does the Splatter Ram, allowing him to be able to breeze through enemies nonstop and change direction as he leaves behind bones that shoot out the ground. This lasts him a good 4 seconds. If you use this while you're airborne, Rick slams down after doing a flip and creates a ring of bones jutting out to hit the opponent. The shockwave, in this case, manages to have a longer distance depending on how big the fall Rick took would be, thus being able to easily stun opponents in that radius with more ease. A regular execution will cost you 1 slot of blood, a halfway charge will cost 2, and a full charge will cost you 3. The Splatter Ram will cost you none.

Rick takes out a double-barrel shotgun. This makes him move slower as well as handicap him of his ability to evade opponents' attacks. The shotgun's power makes it all worth it, though, packed with 16 shells. You can press A to fire one shell out of one barrel. The closer the opponent is to the shotgun blast, the bigger the impact dealt to the opponent. You can press B to fire both barrels for twice the impact. Still, it doesn't increase the range, but one two-barreled blast when the opponent's at high damage, and the opponent's out of here! In the air, Rick uses the shotgun to propel himself upward, allowing him to meteor smash those underneath him on the way to his recovery. Note that these shots inexplicably don't affect the amount of shells you have. You can fire twice while in the air because double-barreled.

Down B - Splatter Siphon

Spikes suddenly shoot out of Rick's body. Any direct contact with then while they're out will leech health from those opponents to Rick. This is easy to kill any extra servants that are like SSEnemies, with a good 5% damage healed as well. During this, the Terror Mask will say one of its random quotes when blood is sucked from an opponent. In stamina matches, if you suck an opponent dry, the corpse will be stuck on the spikes, allowing Rick to throw it at another opponent. This move costs you 1 slot of blood.

Rick goes into his berserker mode and the stage goes monochrome as the heavy metal theme plays as opposed to the music in the stage you're on. As expected from any form such as this, Rick's power is amped up. Unlike any of them, he can still take damage, but he can absorb the blood of his opponents in each hit made, recovering his health like nobody's business. His special attacks also have a boost of power, such as the Splatter Smash's spikes being massive and Rick having more spikes come out of him for a higher damage output to the opponents in the Splatter Siphon, especially for it being able to leech health from opponents faster than when he hits them. This phase lasts for 20 seconds before Rick reverts back to his normal state. With the Necro Meter, the more it's filled, the more power you gain at the start of this, at least when it's over 3 slots.

Up: Terror Mask: "Show them why we call it...'Splatterhouse'."

Sd: *puts on his glasses, then takes them off*

2. Director (Wanpaku Graffiti): "That was some damn fine acting! This'll be a great movie!"

Snake: "Otacon, who's this hulking brute in jeans with a wallet chain?"

Snake: "I thought that guy wore a hockey mask and was less large."

Otacon: "Well, that's the 80s arcade version you're thinking about. This is the one from the 2010 reimagining."

Snake: "I heard it got low scores."

Otacon: "Yeah, but some critics actually take a liking to that game. Anyway, Rick was walking to the West Mansion, or the Splatterhouse, if you will, with his girlfriend, Jennifer Willis, when--"

Snake: "Yeah, I know, and he has to save her from a shitload of failed experiments with the power of the Terror Mask."

Otacon: "How do you know that?"

Snake: "The original had a comic book advert of the story to the game."

Otacon: "Yeah... He used to just use his fists, as well as some weapons he comes across, but as you can tell, this Rick Taylor is able to use some mysterious powers, making him far more dangerous."

Snake: "So, that explains his bizarre spikes and the bone pillars that shoot out."

Snake: "You sure know your geeky stuff, Otacon."

Otacon: *chuckles* "Well, I do my research."

As a child, Richard "Rick" Taylor had a psychic power, sensing the presence of the Corrupted. It terrified him of the world he saw, likely even mentally damaging him in the process. His fear wore off when he met his girlfriend, Jennifer Willis, who some say is too good for a semi-nerdy metal head such as Rick. He once had an affair while he was intoxicated, which he vowed would be his last. He went with Jennifer to the West Mansion, where she would interview Dr. West since they had a date afterward and he planned on proposing to her. However, the plans were cut short when he was taken down by the Corrupted, and saw his beloved Jennifer get taken away. However, all was not lost, for his blood awoke the Terror Mask, an ancient possessed relic of unimaginable power supposedly worn by the Mayans during sacrificial rituals. The mask offered him a chance to save Jennifer, and with all going dark, he took the offer, transforming into a more powerful being, only changing back when Jennifer was safe in his arms again.

Rick has a Necro Meter at the side of his display window. Like in the 2010 game, this would be for his Splatter moves, mainly his side special and down special. He can collect blood from dealing damage to opponents. The more damage he deals, the more he fuels the Necro Meter. The starting amount of blood would be 50%, which is 3 out of 6 slots on the meter. Him getting damaged or KO'd won't affect the amount, and doing damage with any of your Splatter moves that cost you blood won't get you blood. 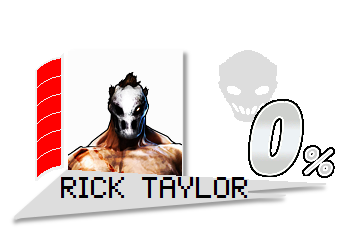 Retrieved from "https://smashbroslawlorigins.fandom.com/wiki/Rick_Taylor?oldid=130641"
Community content is available under CC-BY-SA unless otherwise noted.