Rosa slashes with her sword, and creates a shock wave at her opponent. If you hold B for a longer period of time, she does a bigger version and does huge damage.

Side B - Speed Slice

Rosa dissapears, then reappears, slashing her opponent at high speed.

Up B - Slashing Uppercut

Rosa does a basic Shoryuken-like attack with her sword that does 5 hits.

Rosa goes to her defence stance for 1 second. If someone tries to attack her, she counterattacks with a slash that does 9% damage.

Rosa concetrates and transforms into Shadow Rosa. The Final Smash lasts for 15 seconds.

Rosa spins her arm around before she throws it at her opponent with Darkness Damage. It can be charged for a stronger punch.

Side B - Shadow Stab

Rosa dissapears, then reappears, stabing the opponent with her sword.

Rosa quickly vanishes and reappears in a different location, depending on how the user tilts the control stick. If it teleports into the air, it will fall in a helpless animation. When used quick enough on the ground, it can be used in place of a dodge, side step, or rolling, as there is less lag time and it throws the opponent off. The only way to travel faster with Rosa. This third jump, along with its other normal two jumps, allows for Rosa's superbly long and safe recovery. Teleport also passes through attacks. However, this attack does not cause any damage to the opponent.

Down B - Dark Wave

Rosa punches into the ground and causes a black shock wave, which can stun her opponents.

Victory 2: Rosa teleports out, leaving a rose, falling slowly to the ground.

Lose/Clap: Crosses her arms and does a not impressed facial expression.

Rosa Anarchy is the Daughter of Steven Star and Stocking Anarchy. Some would say that her destiny is to keep the Star Family Name Alive and Strong. She started off as a Cute Child with No Powers and No Fighting Skills, That is until Hades challenge her to See if She have what it take to be a Demon Slayer. Stocking manage to Train her for Days to fight off many Enemies like Vikke the Heavy Metal Zombie Viking, Black Bull and others. A few Months Later, When Steven and Stocking were killed by Sonic.exe, She agreed to stay with her uncle Ralph Star, her half-mother Blazela, Bruce BlazeStar and Kenchia. Later on Agreed to Go Back in Time to Stop Sonic.exe from Killing her Family. Now the She's Older, Her Quest will be Harder, but She'll alway be Prepared for Battle. 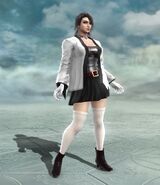 Rosa Anarchy in SCV.
Add a photo to this gallery
Retrieved from "https://smashbroslawlorigins.fandom.com/wiki/Rosa_Anarchy?oldid=109768"
Community content is available under CC-BY-SA unless otherwise noted.