Somari drops onto the battlefield as the cringe-inducing Sonic Adventure 7 intro tune plays.

Somari crouches down and unleashes a rapid discharge of electricity. However, to keep this going, you have to rapidly tap B. Obviously, anyone who makes direct contact with Somari will be getting stunned. The longer this goes for, the more damage it can be able to do to someone charging at you. If you perform this in the air, you will somehow become suspended until you stop the sequence, which will prevent you from recovering, unfortunately. However, there's an exception if you hit an opponent with this while in the air.

Side B - Squirrel Fire

Somari chucks a giant-ass fireball forward. Unlike Mario's fireballs, these fireballs defy gravity like Luigi's fireballs, but they also fly forward at an insane speed, doing half as much damage as a Mii Brawler's lead ball as well as half as much knockback. You have a limited amount of fireballs you are able to throw, however. You start out with 5 fireballs. You can actually charge up your shot, but it'll cost you more of your fireballs. They replenish up to 5 over time. You can stock up to 10 fireballs by using Electric Discharge on an explosion.

Up B - Pipe Dream Physics

An upward warp pipe erupts in front of Somari. When dashing up it, he's launched forth at a high speed. When he goes down, however, he slows down. For other opponents, the physics on the pipe are better, but upon jumping off the end of the pipe, momentum is cut in half, resulting in awkward control. When the pipe is already out upon reinput, you can fire a Podoboo from it, doing as much damage as the regular Squirrel Fire. The pipe is able to be broken, which can cause it to crush opponents underneath. If you perform input while airborne with the pipe out, you'll go down another pipe and come out the pipe already out. Without it, however, you'll dash forth and leap off a mini-pipe, which is good for both diagonal and horizontal recovery.

Down B - Spin Dash

Somari does the trademark maneuver Sonic is known for. With no chargeup, he goes at a distance of three Stage Builder blocks with damage done as he passes by. You'll even manage to get suspended in mid-air and can simply wander around that plane until you touch land, get hit by someone, or jump. The more you rev the Spin Dash up, the faster you'll go as you'd expect from this. If you press A while revving up, however, you'll fire a light blue disc at the opponent. It travels around the thick ground of the stage like a Hothead, and falls off of light platforms. You can even fire these things to suspend yourself in the air.

Somari dashes out and comes back with the final boss from Super Mario World 64. You are only able to move on it through jumping, but you can stomp an opponent into the ground. Press A to shoot three Bullet Bills. Press B to throw this poison mushroom that will follow the nearest opponent. Be aware that during the frames where you stand still, you can get hurt at the top. This nonsense lasts you 10 seconds.

Up: *holds aloft his sword for a bit*

Sd: *looks upward, then to the screen as he waves a peace sign*

1. *strikes his box art pose in front of a goal post*

3. *crouches down and flashes a peace sign repeatedly* "You're unlucky to have to fight me."

Colonel: "Snake, you know who that is?"

Snake: "Is he a mutant, or is he just into costumes?"

Colonel: "Somari made his first appearance in 1994 as a bootlegged fusion of Sonic and Mario. And since then, he's become a worldwide phenomenon among bootleg video game enthusiasts. There's probably not a single one of them who doesn't know Somari. He's that famous."

Colonel: "This is a once-in-a-lifetime chance, Snake. Get out there and show him what you can do. It's the only way to live a life without regrets."

There's a new actor to speed Lawl, and his name is Somari. You may be thinking "What the hell is a Somari?" Well, he's an Adventurer with the likeness of Mario, only a bit more lanky and blue. Also, far more fast. He's the main topic of choice for anyone willing to discuss bootleg games of old, and he's able to speed upward when he approaches upward slopes and walls. He's got the airwalk when he bounces off a spring, and he's learned a few tricks up his sleeve. Oh, and did I mention that he's a motivational speaker? Just look on the back of his game's box. 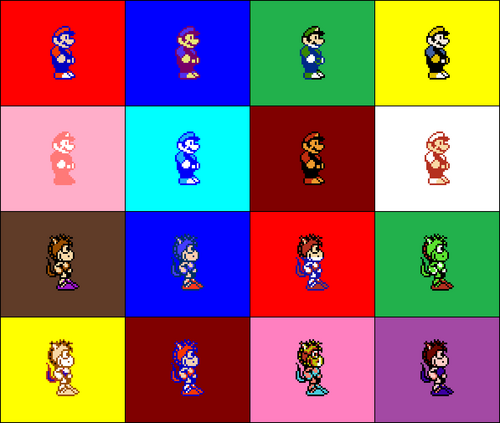 Retrieved from "https://smashbroslawlorigins.fandom.com/wiki/Somari?oldid=143992"
Community content is available under CC-BY-SA unless otherwise noted.