Steven appears as a shady figure, then steps forward.

Steven slashes with his sword, and creates a sound wave. There are multiple uses for this. If you just press B, the slash will be fast, but weak. If you hold B for a few seconds to charge it up, the wave will have moderate speed and power. If you hold B for a longer period of time, you'll be able to fully charge up the blast (a full charge is indicates when the blade turns blue). A fully-charged slash can lock onto the nearest opponent no matter what. However, this is the slowest shot.

Steven charges forth with his sword. A direct hit deals 18% damage. If an opponent gets hit from landing on Steven or jumping under him while he's using it, the opponent is dealt 14% damage. Steven can also do this while in the air.

Side B (Elite) - Stun Pistols

In a similar style to Hitler's Fusilation, Steven fire with his dual pistols. The bullets can leave an opponent stunned for a few seconds or they can disable a move. But to prevent spamming this, each gun can only shoot 6 bullets, meaning that when the bullets run out, you have to wait a bit to reload your ammunition.

Side B (Garterbelt) - Slash Wave

Same decription as the neutral special for him in Elite Warrior Battle Royale.

In a similar style to The King's Squadala, Steven hops into a fused animal of a Moray and a Bat. When used correctly, it can be used to fly for an unknown amount of time. A single Stun Pistol or an uppercutying slash can be used in conjunction with this move.

Steven twirls his sword over his head fast. This causes him to be lifted up and flown to safety for 7 seconds. Anyone hit by his sword on the sides gets hit with 1% damage and minor knockback. Anyone caught overhead takes constant damage (1% per spin) and next to no knockback. You can control Steven's flight by moving the analog stick up, left, or right. Press B to shoot people with one of the Stun Pistols. Press A to cancel it early.

Down B (Elite/Garterbelt) - Broken Cards

Steven uses a bunch of magical glass cards and throws them down on the ground, breaking them into bits. This will become a spike trap which deals damage when someone walks over it. There can be only one broken card on the stage, so if you throw another one on the ground, the old bits will disappear. Nicolas Cages's Unmasked or Michael Jackson's Hat Throw can easily remove the trap. With Dr. Wily's Electric Nightmare, The Broken Cards will be thrown fiercely at you, doing major damage; or they can be relocated on the stage.

As the final smash begins, Steven will let out a devastated scream, transforming into his darkest rampage mode. Within this state, Steven now has two swords and is able to fly around the stage; this also gives him a special moveset:

Side B - Blackhole Shot

Dark Steven uses a more special gun and shoots with it. The bullet can leave a blackhole upon hitting the terrain or an opponent, causing constant damage and trapping anyone who dares to touch it. However, if you shoot another bullet, the first blackhole will disappear.

Up B - Arrow Flight

Same as before, but it now has Steven pointing his twin swords in the fashion of a spinning arrow while he's flying.

Down B - Death Slash

Two blades will form in Steven's arms and will be used for grabbing.

If the rampage dark form is defeated, Steven will not lose a stock.

Steven slashes with his sword and creates a sound wave. You can tap B to do a normal one, it's weak but fast. You can rapidly tap B to do a slash combo that creates a series of sound waves that disappear at mid-range. You can even hold it down to perform a red slash wave that can deflect projectiles and can pass through the opponents that it hits. The more opponents it passes through, the less damage it deals to the next person.

Side B (Swordsman Style) - Sword Charge

Steven points his sword forward, doing a first jab to anyone up close. He then gives himself a forward boost. Anyone (opponent-wise) he runs into is dealt with a 7-slash combo. Each slash does 5% damage. Anyone around you will be knocked away. He automatically stops if he hits the edge of the stage or a platform; or you can stop him by pressing A/B. He also deals damage to those he runs into due to charging forth. The damage done depends on how far he dashed and for how long.

Up B (Swordsman Style) - Swordcopter

Steven twirls his sword over his head fast. This causes him to be lifted up and flown to safety for 7 seconds. Anyone hit by his sword on the sides gets hit with 1% damage and minor knockback. Anyone caught overhead takes constant damage (1% per spin) and next to no knockback. You can control Steven's flight by moving the analog stick up, left, or right. Press B to smake people with a spoon. Press A to cancel the flight early.

Down B (Swordsman Style) - Style Change

Steven sheathes his sword and gets in a different stance. Instead of using his sword, he uses a different array of weaponry.

Steven gets out a magic card made of glass and throws it on the ground. This then causes the card to shatter and become a spike trap. However, there are different effects willing to happen with any one of them you throw depending on the color of the broken shards. Each has 2 effects, one happens when someone walks over and the other happens when someone lands directly on the glass. They are as follows:

Red, Orange, Yellow, Glowing - Anyone who walks over the shards will be burnt. If anyone lands directly on the broken glass, he/she has to deal with afterburn, lasting for 15 seconds.

Cyan, Cobalt, Metallic, Stone-Washed, Glowing - Anyone who walks over the shards takes frostbite damage. If anyone lands directly on the broken glass, he/she will be frozen. The freezing depends on the ice resistance.

Yellow, Glowing - Anyone who walks over the shards is stunned. If anyone lands directly on the broken glass, he/she is stunned for an extended amount of time.

Green, Purple - Anyone who walks over the shards has 3% health transferred to Steven. If anyone lands directly on the broken glass, he/she will be poisoned.

There can be only one pile of broken glass, so if you try making a second then the first will disappear.

Side B (Seven Style) - Stun Pistols

Steven gets out a pair of pistols. You can hold down A in conjunction to choose a direction in which you'd care to shoot by using the analog stick. Move it forward to shoot with one (obviously in the direction you're facing), move it back to shoot behind and perform evasive action, move it up to shoot up of course, or move it down to shoot in both sides (if this is done in the air, he shoots under himself). Each pistol has 6 bullets. If you run out, you have to wait a while before you can shoot again.

Steven rides a hybrid of a moray and a bat and takes flight in a similar fashoin to King Harkinian's SQUADALA! recovery. You can move the hybrid around in any direction with the analog stick. Press B to shoot people with a stun pistol, it will also stun airborne opponents. Press A to cancel it. It will also be cancelled by getting hit from the sides or the head, by crashing, or by landing the MoBat.

Down B (Seven Style) - Style Change

Steven gets out his sword and gets in a different stance. Instead of using a different array or weaponry, he uses his sword.

Steven holds aloft his sword (in swordsman style, he'll get it out if this is done in seven style) and it turns white. He then dashes forth and deals slash damage to everyone in the y-axis he's in. Anyone who tries to hit him will be grabbed by the collar and thrown down on the ground along with being pelted by a single card. He then throws 6 cards on the ground and they erupt in different locations of the floor, all broken. It then goes into a sniping mode with his dual pistols. There are 2 crosshairs, one for each pistol. The left one can be moved around with the analog stick and the right crosshair can be moved with the C-stick. Press L to shoot with the left, R to shoot with the right. Headshots deal twice as much damage and stun for twice as long. If you fool around in this mode for 10 seconds or if you run out of shots for both pistols, this mode ends. To conclude it all, the survivor with the most damage is shot up into the air by an uproar of fire.

Steven Star: I Love You

As a Team with His Girlfriend. They Both Hug

Add a photo to this gallery 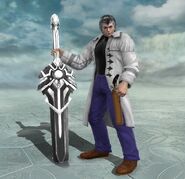 Steven Star in SCV.
Add a photo to this gallery

Retrieved from "https://smashbroslawlorigins.fandom.com/wiki/Steven_Star?oldid=136269"
Community content is available under CC-BY-SA unless otherwise noted.