This page is for a character that is from other lawl series, for the original duo that is done by Chincherrinas see Panty & Stocking.

Stocking uses her trademark stockings as swords at her opponents. When Quickly tapping the B button, it causes her to slice once to whatever direction you are facing. Holding B will causes Stocking to slash wildly from both sides. What different between Stocking's and Jack's is the it slices down nearly any projectiles and/or shield.

Side B - See Through

Stocking takes a ride in the sister's convertible, See-Through. You drive forward in the facing direction and run over opponents. This can very often prove hard to get back onto the stage for recovery. It also leaves the See Through exposed to edgeguarding

Stocking to use both Stripes as a mini helicopter use for basic recovery. It provides decent vertical recovery and controllable. As to attack, when a opponents is got by this, they get repeats damage. Thus, only on top of the Stripes. (However, it can't slice down projection and/or shield).

Stocking will eat some cake, which will restore up to 45% health. But Stocking can't eat the cake until 10 seconds.

Stocking will raise her striper, and dashes into her opponent and rapidly sliced them. When trapping the opponent, she will start striking repeatedly for an immense amount of damage, ending with a last strike greatly increasing the rate of KO. which do a lot of damage. This attack is performable in the air, which is risky and probably KO yourself when you miss. Unlike Panty's Final Smash, this will not end with the opponent in a "realistic" explosion.

Stocking is a level-headed and intelligent girl, though, she can be rude if provoked, especially towards her older sister, Panty. Stocking enjoys eating various desserts and sugary food, but doesn't seem to gain weight (she assures all the fat goes towards her breasts anyway). However, she acts quite enraged and sensitive whenever anyone calls her fat. Stocking is often considered to be the personification of the deadly sin, Gluttony, due to her obsession with sweets. She does not share Panty's obsession with sex, even though she does display some masochistic tendencies, such as bondage, vore and electrocution. Which is ironic, since she constantly insults the demon sisters and Corset, by calling them 'BDSM loving freaks'. Instead, Stocking claims she has very special standards in men, and would rather be with someone she loves, than simply for sex. She strings men along (not wanting them to believe she is 'easy'), and would never cheat on someone she truly loves. However, she has been shown to have a very strange and twisted vision of what attractive is. She hates spicy food, just as much as Panty hates sweet food. Stocking is sometimes overshadowed by Panty when in larger audiences, like in "Sex and the Daten City" and "1 Angry Ghost". She is almost always seen carrying around a plush cat, Honekoneko ("Bone Kitten"), whose expressions often match Stocking's mood. 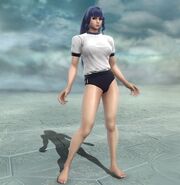 Stocking in SCV(Alternative)
Add a photo to this gallery

TBA
Retrieved from "https://smashbroslawlorigins.fandom.com/wiki/Stocking?oldid=138378"
Community content is available under CC-BY-SA unless otherwise noted.