Rivaling against the Spartan Army lead by King Leonidas, the Persian Army consists of a huge force of Persians under the command of their king, Xerxes. In 300, the Persians invade Greace to establish themselves as world dominants, under a massive gathering of Persian soldiers, only being resisted by an army of 300 Spartans. This group is part of the Subspace Army in Smash Bros. Lawl, alongside Dr. Robotnik and his Badniks.

Persian Swordsmen are the most common type of Persian soldiers. They attack by charging towards the enemy and slashing him/her with their swords. They're not much of a threat in small numbers, but they prove to be a headache attacking in large groups on both sides.

Persian Spearmen are Persian soldiers wielding spears, respectively. They stand in one spot and toss their bladed sticks at intruders like Leonidas's neutral B. Excellent dodging skills are needed to defeat them.

Persian Archers are Persian soldiers armed with bows and arrows. They stand in one position and release an arrow in a straight line. The arrows travel fast. Skillful dodge timing is necessary.

Persian Torchers are Persian soldiers with torches. They slowly charge up their flames before unleashing a chain-damaging wave of fire at the opponent. Fast characters are best for taking out these soldiers.

Persian soldiers dressed as magicians, Persian Bombers attack by throwing smoke bombs at the player. The bombs have a delay rate of a few seconds, unless the bombs hit the player directly. Persian Bombers are a nightmare in groups, so they must be finished off quickly.

Role in the Subspace Emissary

In the Subspace Emissary the Persians fight alongside the Badniks as parts of the Subspace Army. Xerxes still commands his troops, mainly leading ambushes for any at all heroes left alive. After destroying Sparta, Xerxes was positioned near the cliffside lying in wait to ambush any at all heroes who would oppose the Subspace army. There, Leonidas is forced to fight off 50 Persian soldiers, which consist of Swordsmen, Spearmen, Archers, and Bombers.

Later in The Persian Forest, the Persians are sent to burn down the forest in an attempt to exterminate any at all heroes left. Then, Leonidas emerges from the underbrush and begins butchering the Persians. In-game, they need to be killed within a 50 second time limit, otherwise a burnt tree will kill Leonidas. When exploring the forest, killing Persians along the way, Leonidas encounters an old friend, the Persian Messenger he memeticly kicked down a pit. The messenger dies by, what else, falling down a well. Once The King joins Leonidas, another ambush is executed, this time with the help of Robotnik's Badniks. The armies are defeated, leaving Robotnik and Xerxes to retreat.

Not shortly after, Ganondorf orders Xerxes and Robotnik to send their troops to assist Irate Gamer in fending off the Nostalgia Critic, Madotsuki, and Tommy Wiseau. Primids, the Persian Army, and Badniks all fight these three heroes, yet they ultimately fail. 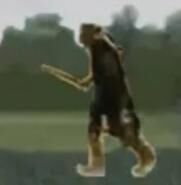 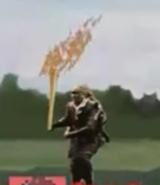 Persian Bomber
Add a photo to this gallery
Retrieved from "https://smashbroslawlorigins.fandom.com/wiki/The_Persian_Army?oldid=17713"
Community content is available under CC-BY-SA unless otherwise noted.