World of Smash Bros Lawl Wiki
Register
Don't have an account?
Sign In
in: Playable Characters, Press Your Luck, Whammy,
and 18 more

Whammy meditates, surrounded by a red aura. Using the analog stick will make him spin around as a twister like Taz, able to hit his opponent. Whammy can't jump, but he can go higher when he's in meditation mode. This move is useful, especially in mid-air.

Side B - Money Mower

Whammy gets his lawn mower and moves straightforward. The opponent will be mowed down with a good amount of damage dealt each time he/she gets hit. You can use the analog stick to move Whammy around, but he cannot jump during this move. However, the lawn mower can destroy items. If you try to mow explosive class items, the lawn mower will explode.

Up B - Whammy Potter

Whammy dresses up as Harry Potter, gets out a broomstick, and flies upward. Much like King Harkinian's up special, the player can shoot projectiles aimed downward. By pressing B while flying, he can fire magic at his opponents. The flying lasts for 3 seconds.

Down B - Money Fryer

Whammy places a fryer on the ground and tosses cash in it, creating a fog or smoke that can damage his opponents each second they stay near it. He can't use this attack in the air, and if the opponent attacks the fryer before he throws cash, it will explode, causing a huge amount of damage.

Whammy transforms into a Godzilla-sized monster and starts rampaging, throwing rubble at the stage. Each chunk of rubble does 50% damage. However, Whammy cannot attack, unless he steps on someone. The FS lasts 10 seconds.

Victory 1: Whammy performs a double whammy to trick his opponent.

Victory 2: Whammy shows his money, and puts on and sends gas to them, and he lights it on fire.

Victory 3: Whammy allows the five whammys, including him, to jump up for victory.

Lose/Clap:Whammy goes to a object, and he hits hit foot. 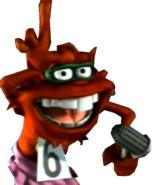 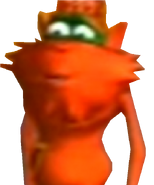 Fatality One: Whammy brings out his grenade. He throws it to his opponent. His opponent has the grenade, and he/she pulls the pin out. Then, the grenade explodes Whammy's opponent. The opponent was explode in gore and blood. Whammy puts the opponent's blood, leg, arms, and other gore into his box. "Prepare to put these fine important final documents." said Whammy. He sends his opponent to the shatter grinder. The blood was showing out of the shatter grinder.

Whammy! (subtitled The All-New Press Your Luck for its first season) is an American television game show that aired new episodes on Game Show Network from April 15, 2002 to December 5, 2003. The program is updated version of Press Your Luck, which originally aired on CBS from 1983–86. Reruns of Whammy! have aired since production of new episodes stopped in 2003, and the program currently airs in reruns on GSN weekday mornings at 9:30am Eastern/8:30am Central.

The "W" emblem on his chest

Community content is available under CC-BY-SA unless otherwise noted.